3 Sexy Virtual Reality Fitness Companies to Watch Out For

Remember when you couldn’t make a phone call and check your email at the same time? Well times have changed. The upcoming March 28th release of the Oculus Rift virtual reality headset officially ushers in a new era of technological innovation.

Virtual reality is a computer-generated simulation of 3D images or environments that people can interact with using either headsets or gloves. With Facebook investing over $2 billion dollars in the technology and other companies like Sony and Samsung following suit, it’s expected to become one the most groundbreaking innovations in recent history.

The possibilities are endless for the fitness industry. Imagine being able to put on a headset, sit on a stationary bike and literally feel like you’re riding through a virtual environment? Or being able to interact with a virtual personal trainer as they walk you through an individualized workout? With VR, all of these things are possible and more.

Here are the 3 sexiest VR fitness companies you need to watch out for.

This Munich-based startup has one goal: motivate people to exercise more. Their method? Blending the physical world with a virtual one by making you the main character in a video game intended to work out key muscles throughout your body. Their machine, which is designed by HYVE Innovation, has cradles for your knees and elbows plus handlebars at either end for the user to grab onto.

Compatible with both Oculus Rift and Samsung Gear VR, the Icaros machine lets users slide their legs and arms, tilt forward and backward and roll from side to side. Icaros says that the movements will provide comprehensive workouts for muscle groups ranging from your neck down to your calves, while also helping improve balance, concentration and reflexes. The first game in development is an air pursuit game that simulates users flying through iconic landscapes like the Alps, all while getting fit in the process.

Icaros is available for preorder for $8,200.

Billed as the world’s first 3D indoor training experience, California startup Widerun has combined virtual reality with stationary bikes. Like Icaros, it’s compatible with Oculus Rift and Samsung Gear VR and is comprised of a steering component and base that attach to normal bikes.

a recipe for motion sickness, Widerun says that they’ve created a system that specifically avoids triggering the condition. As a result, Widerun has immense potential as a platform for future bike-centric virtual reality games, from BMX bike-tricks to Tour de France esque racing. For now the focus is on creating a scenic virtual world for spin enthusiasts. After all, staring at a wall for 30 minutes during your spin class is infinitely less exciting than biking through the streets of San Francisco.

Widerun will be available for $450 upon release.

This Austria-based startup was one of the first companies that proved virtual reality can be used outside of the gaming or entertainment space. At last year’s CES, they unveiled a prototype concept using Oculus that turned their workout technology into a virtual reality application. In their demonstration a trainer appears in the virtual world and has the user follow the trainer’s workout.

Along with a trainer, the app also includes notifications to let the user know if they are doing the exercise correctly. For example, if the trainer has the user doing squats, an indicator light will come on to show you if you squatted far enough. The biggest drawback is that headset technology is still too large and heavy to be suitable for active workout. But like with the other technologies mentioned, the possibilities for Runtastic in the future are endless.

Virtual reality isn't the only technology changing the fitness industry in 2016. Check out our guide 10 Tech Trends In 2016 to learn about more. 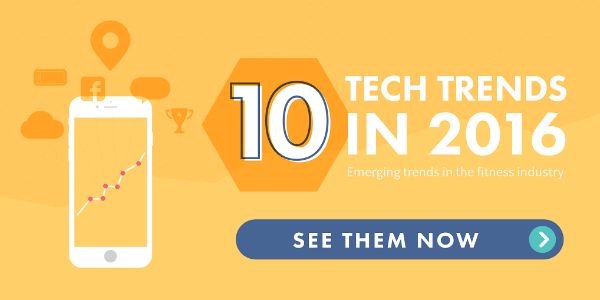