Rewards programs aren’t new. Frequent Flyer Miles, hotel rewards points and “buy-10-get-1-free” ice cream punch cards have been around for decades. Your club probably has a rewards program as well. But many clubs are still using a website, or even worse pencil-and-paper to track their rewards points. Going forward, your club needs to have a mobile rewards program. Here are 5 crazy statistics that prove why.

1. A majority of your members own smartphones

That majority is only growing, with no signs of slowing down. From 2014 smartphone ownership grew by 4%. If this growth rate continues, over 75% of Americans will own a smartphone in 2017.

2. Members are checking their phones at an insane rate

“How many times a day do you check your smartphone?” has become an impossible question to answer for many people. Checking your phone is now like breathing--something that people do unconsciously without even thinking about it. Time magazine reported that Americans collectively check their smartphones 8 billion times a day. That’s over 11 times more than the number of breaths you will take in your entire life.

Checking your phone is now such a reflex that nearly ⅔ of Americans check their phones for new alerts even when their device didn’t ring. A mobile rewards program directly integrates your club with the closest relationship in your members’ lives.

40% of people surveyed by 3C said that “overall rewards” motivate them to join a loyalty program. For comparison, only 22% said special events motivated them, 20% said deals, and 5% said points. Even if points and rewards ultimately result in the same benefits for members, using specific “Rewards” language will get more members to sign up.

Despite all of that evidence that reward programs can be profit making machines, 65% of brand marketers said that they either lacked the IT resources, or didn’t know how to launch a mobile rewards program.

So to summarize: a majority of Americans own smartphones, check them 46 times a day on average, are motivated by rewards programs to spend more money, and your competition doesn’t know how to take advantage of this. By launching a mobile rewards program you’re not just taking advantage of the mobile revolution and giving members a program they want, you’re becoming a fitness industry leader as well.

Want to see this in action at your club? Read the Mobile Marketing Manifesto to learn how mobile programs drive revenue: 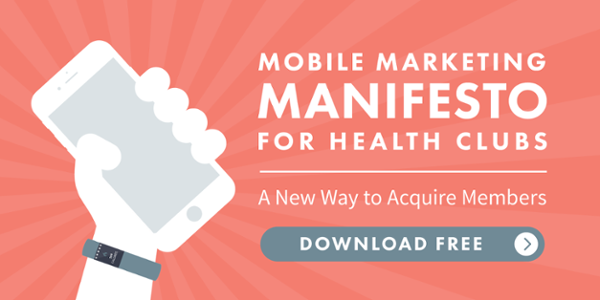