How One Club Got 90 Prospect Referrals in 1 Month

A midsize club chain was doing well, but was facing the eternal health club pain point: acquiring new members. They tried traditional tactics, but they weren’t getting enough new members into the club. Furthermore, the club was spending a fortune on billboards or TV ad buys. They needed a marketing strategy with a better return on investment.

The club already had a mobile app that was popular with members, but when they heard about a new feature package, they jumped at the chance to supercharge their referral program. The package made it simple to engage current members and incentivize them to refer their friends. The new features include a rewards program, mobile member referrals and mobile guest passes for curious prospects.

The club decided to give it a shot, and launched the features at two of their locations. They spent $299 per location for the Add-on features. The club’s members immediately engaged with the new rewards program, which incentivizes club members with spendable points for activities like daily check-ins or competing in challenges. The activity that is rewarded with the most points is referring friends and family to the club. These rewards greatly encourages members to engage with the club, and especially to reach out to their family and friends.

The results didn’t disappoint - after just one month at two locations, club members had referred 90 new prospects through the club mobile app.

When those prospects were referred by their friends, they received a text message from their friend--not a corporation or mystery number--with a link to download a free guest pass to the club. When prospects followed the link they were able to download the mobile app and create a profile. Once they were logged in, prospects could use the mobile guest pass feature to check into the club seamlessly with their smartphones, and experience the club just like a normal member.

After trying out the club, 4 of the prospects purchased new memberships with a life-time value (LTV) of $636 each, totalling $2,544 in new revenue.

How much additional revenue could your club earn with Mobile Acquisitions? 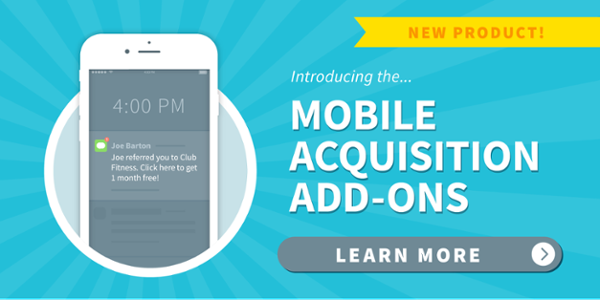